On January 1, 2011, New York became the 33rd major jurisdiction to implement a move over law.  Basically, the law orders drivers to move over to another lane when they a police vehicle is stopped on the side of the road. 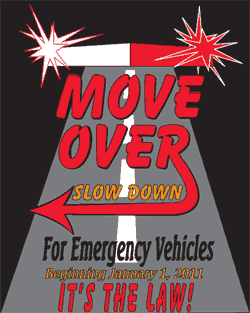 The law is codified in the Vehicle Traffic Law under § 1144-a and was named in honor of the memory of officers Ambrose and Searles who were struck and killed by drivers who failed to move over while they were on duty.

Send us an email
Mover Over Law

§ 1144. Operation  of  vehicles  on  approach  of authorized emergency vehicles.
(a) Upon the immediate approach of  an  authorized  emergency vehicle  equipped  with  at  least one lighted lamp exhibiting red light visible under normal atmospheric conditions  from  a  distance  of  five hundred feet to the front of such vehicle other than a police vehicle or bicycle  when  operated  as  an  authorized  emergency vehicle, and when audible signals are sounded from any  said  vehicle  by  siren,  exhaust whistle,  bell,  air-horn  or electronic equivalent; the driver of every other vehicle shall yield the right of way and shall  immediately  drive to  a  position  parallel to, and as close as possible to the right-hand edge or curb of the roadway, or to either  edge  of  a  one-way  roadway  three  or more lanes in width, clear of any intersection, and shall stop and remain in such position until the authorized emergency  vehicle  has passed, unless otherwise directed by a police officer.

(b)  This  section  shall  not  operate  to  relieve  the driver of an authorized emergency vehicle from the duty to drive with reasonable care for all persons using the highway.

About Our Firm:  At Joseph P. Villanueva, Attorneys At Law we excel at getting tickets dismissed or reduced.  We have more than 20 years of legal experience and have gained a reputation among our peers as being superb lawyers.  Our team of traffic and criminal defense lawyers is lead by Joseph P. Villanueva.  He is a former prosecutor.  Having a former prosecutor on your side can help in analyzing critical issues in your case.  This can make the difference in you keep your license or having your license suspended or revoked. Call us now at 800-893-9645. Send us an email