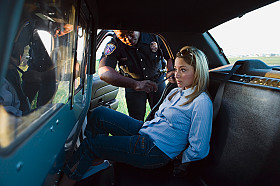 In New York, if you are pulled over by a police officer and under suspicion for driving while intoxicated, you will probably be asked to take a breath test.  This is sometime referred to as an alco-sensor stet.  If you “refuse to blow,” the New York State Legislature has added penalties to incentive you to do so.

If you are charged with DWI, DWAI, Aggravated DWI, or other similar charge under VTL 1192, you need to call our experienced DWI attorneys today at 914-723-7900.

In New York motorist is deemed to give his consent to a breath test.  Driving a motor vehicle in New York is a privilege and not a right.  As such, DMV has the power to suspend or revoke a person’s license for their failure to submit to a breath test.

The DMV Refusal Hearing must be held within 14 days of the arraignment.The purpose of the test is to ascertain your blood alcohol content also known as “BAC.”

In order for the State to establish that you “refused,” the arresting officer must establish four elements at a DMV refusal hearing:

If the Judge finds that you did in fact refuse to submit to the test, you will receive a one year license revocation. On the other hand, if the Judge decides in your favor then your privilege to drive will be restored the same day.

If you are charged with any type of criminal matter, traffic case, or DWI, call our attorneys today for a confidential consultation at 914-723-7900.

Back to main DWI page

Send us an email