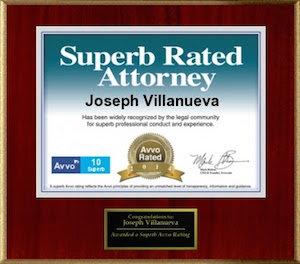 We are pleased announce that Joseph Villanueva has been recognized by the independent rating company avvo.com with a perfect 10.0 rating. His rating was based upon many factors including client recognition, industry recognition, and lack of a disciplinary record. This is the 5th year in a row for which he has been given this distinction. This accolade is given to less than 1% of the legal community.

Mr. Villanueva is the law firm’s lead trial attorney and head of their traffic ticket defense team. He has been admitted to practice law in New York for over 15 years. He began his legal career as an attorney for New York City until he was recruited to work as a Senior Trial Counsel for a Fortune 100 company.

He is grateful for this honor and attributes his success to his law firm, family, and old-fashioned values of honesty. “I must recognize my law partner for his support as well as my family back at home. This was a total team effort.” With respect to the old fashioned value of honest, Mr. Villanueva said, “I’m a firm believer in being brutally honest with all potential clients. It helps manage expectations and conflicts down the line.”

When Mr. Villanueva is not practicing law, he is an avid community activist and volunteers for organizations such as the Boy Scouts of America.